Korean director Pil-Sung Yim's Hansel and Gretel (Henjel gwa Geuretel) is an incongruent mixture of horror and fantasy with dramatic fluctuations between the two genres. The relationship between this 2007 story and the Grimm 1812 story of the same name is very loose and it is more appropriate to say that the fairy tale motivated and inspired the characters in this Korean tale rather than that it is a remake of the book. There are a number of references back to the original but don't expect cannibal witches or edible houses... do expect cannibalism though. To supplement the fairytale feel of the movie there are references to other fantasy stories with phrases like "there must be a pumpkin wagon and red shoes somewhere" thrown into the dialogue and numerous visuals reminiscent of Alice in Wonderland.

The movie is visually stunning with enough vibrant colours in the fantasy portions of the film to make Bing Crosby feel compelled to go shopping for a sweater and an overbearing morbidness during the dark parts instantly slipping the viewer into the arena of more traditional disturbing Korean horror. One minute you are in Never Ending Story clinging to the scruff of Falcor and the next you are in Carved wishing you had hidden the scissors. The combination of these fairly drastic peaks and troughs means that the viewer is in for a taste of bi-polar life or, if already inflicted then it is recommended that all sharp implements be removed from the vicinity before hitting play. While some movies manage to use this genre-switching to their advantage Hansel and Gretel misses a trick and evens out somewhere in the middle achieving neither. This is a shame as numerous scenes have so much potential. The fantastical scenes are very well crafted and conjure up a real sense of the days when LSD was more widely available. The more sinister sections feel very morose and conjure up some dark images of child abuse, hopelessness and despair filled situations.

Eun-soo introduces the front of his car to either side of a tree on a lonely road somewhere near the centre of nowhere, he gets lost in the forest and collapses. When he awakes from his vehicular enforced slumber it is dark. His misfortune is soon cancelled out by a stroke of good-seeming luck as a little girl in a red hood, by the name of Young Hee, stumbles upon his battered self and offers him some home-hospitality with her parents until he can get back on the road. Eun-soo is greeted by the perfect happy family, a house full of toys and a plate loaded with cake and candy for nourishment. It seemed like what every child would wish for. The kids, Young Hee, her older brother Man Bok and her younger sister Jeongsun seem to rule the house and despite the parent's faÃ§ade it is obvious that they are in a situation that is out of the norm.

Eun-soo soon realises that finding the way out of the forest and back to the road is going to be more difficult that he first suspected and the familyâ€™s lack of enthusiasm for him to leave impedes his efforts. Soon he begins to feel trapped despite not understanding how this could be happening. Mum and Dad run for the hills and leave Eun-soo with the children who are beginning to exhibit a much more sinister demeanour. It becomes apparent that for Eun-soo to escape from paradise he must discover the children's secrets and hope that no evil potential parent-replacement figures turn up to try and foil his plans.

The movie is quite long (almost 2 hours) but the inability to maintain any suspense makes it seem a lot longer. The right elements are there, the intricacies of the multifaceted story are revealed in a manner that the writer should be proud of, the characters are well developed and, viewed in segregation, the two intertwined stories would emote expertly. Possibly the professional execution of the two alternate genres is the movie's downfall. The fantasy is so beautiful that the horror seems misplaced. The horror seems wasted when suddenly juxtaposed with some colourful and magical fuckery. The movie just doesn't seem to gel.

There is also a distinct Christmas feeling to the movie, another plot device that seems to be crammed in amongst the rest of the multitude of influences. There is even an appearance from Mr. Claus himself who unwittingly sets the evil in motion from deep within his benevolent Korean eyes.

The original Hansel and Gretel was indeed a dark and despair filled tale which switched to the exuberance or a childhood fantasy with a cacophony of colourful edibles but, whereas the original tale progresses through these scenarios with aplomb, this Korean tale seems to jump around too much. Maybe entering into the viewing experience without any expectations of a horror film may be an advantage to the enjoyment factor as the horror seems to be bubbling underneath. It seems like too much has been included and maybe a subtler, more succinct story would have benefitted the overall experience maybe something a bit like Joe Dante's contribution to the Twilight Zone movie... hmmmm...
This review was posted on 27 December 2010 by
Pazuzu Iscariot
Categories: Asian Horror Movies
Tags: 2000s, 2007, Folklore & Fairy Tales, K-Horror, Korean, South Korea 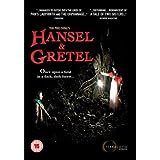