The most visceral horror film ever made.
Posted on 13 August 2011 by
The Zombie Mike

Murder Set Pieces tells the story of a German photographer working in Las Vegas with an insatiable appetite for brutally slaughtering young women.

The star of this movie is, without doubt, the violence and gore, and I would imagine that this is the way the director, Nick Palumbo meant it to be. The plot falls secondary to this. Way, way secondary. I'm not sure this was quite so intentional.

The plot, such as it is, revolves around two different viewpoints of the story. One side is our main character, the photographer (as he is billed) and the other is the ten year old sister of the unknowing girlfriend of the killer. This ten year old girl does not trust our main character one bit, and begins investigating him for herself. This sounds quite interesting on paper, but is not at all well executed, something that cannot be said of the many women that fall prey to the killer.

The murders, though not always done fully on screen and sometimes made slightly ridiculous by the overacting of the main character (played enthusiastically, if not particularly well, by Sven Garrett), certainly have an air of realistic and gory brutality about them. One semi-drowning and throat-slitting bathroom scene sticks in mind as particularly effective. The violence sometimes get so over the top that it almost becomes like cartoon or spoof violence, but it still manages to retain a stomach turning level of sadism that keeps it from becoming unaffecting to the viewer. This is not surprising when we realize that effects in this film come courtesy of the masters of gore themselves, Toetag, well known as makers of the August Underground trilogy. These guys really know their way around a bucket of blood and guts and it shows in every scene of this movie. Pair this with Nick Palumbo's ability to direct on screen violence and you should have a blood-drenched winner. Unfortunately, his ability to direct does not appear to stretch to actors, dialogue or plot.

The film is essentially what the title says. It is a string of murder scenes strung loosely together with a rather nonsensical plot. Firstly, it would appear there are no police or forensics teams at work in Las Vegas, and no one at any point ever thinks "hmmm, generic stripper numbers one, two and three all went off with that creepy German guy and havent been seen since, maybe we should call the cops?".

The investigative young girl is played pretty well by Jade Risser, but her story is not given the care and attention needed to make the viewer really engage. It also makes no real sense that she seems to be the only person that sees how crazy this guy is when a deaf, blind mute would undoubtedly have thought, "Wow that guy is creepy!". When the smartest person in your movie is a ten year old, maybe you have a problem with your characterization.

It is also worth mentioning that though they have their names on the DVD cover, Tony Todd, Gunnar Hansen and Cerina Vincent appear only as minor and sometimes pointless cameos. Fred Vogel of Toetag pops up for a cameo as an armed robber, but this again brings little else to the story.

I would say this is worth a watch if you are a big fan of Toetags effects, but for little else. This is a shame, as I really wanted to like this movie, but ultimately it left me disappointed. A self indulgent movie that seems to think its viewers are idiots who will watch anything nasty you throw on the screen and love it, as true horror fans we know this isn't true. 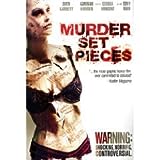