The Curse of Michael Myers is the sixth movie in the Halloween franchise. This movie occurs six years after our last instalment and the masked Michael Myers is back, once again from the dead, to terrorise the inhabitants of Haddonfield.

Jamie Lloyd Carruthers (this time played by JC Brandy) was kidnapped and taken to the cult of the man in black. This cult appears to be controlling Michael to fulfil some archaic prophecy to do with killing all of your family members to save the masses. Jamie, all grown up and with baby decides to escape from the cult and save her child. Unfortunately Michael Myers is sent to retrieve them and return them to the cult.

It just so happens that it is around Halloween when she escapes and the whole of Haddonfield is celebrating the most infamous serial killer ever to grace their town, whilst the man in black is stalking around trying to recruit a new child for his cult. The child he decides upon is the son of Kara Strode. Kara lives with her parents in the old Myers house and is somehow related to Laurie Strode who was the heroine of the first Halloween movie (played by Jamie Lee Curtis).

Across the road lives Tommy Doyle, one of the children who survived the first Halloween, who is now obsessed with Michael Myers. After hearing a desperate sounding Jamie on a Halloween radio show warning of Michael's return, Tommy uses his powers of deduction to find Jamie's baby stashed in a cupboard at the bus station. It now becomes his mission to protect the newborn child, with the help of Kara and Doctor Loomis.

After the somewhat confusing and roughly put together storyline is out of the way we get to the slashing. Basically Michael returns to his old house remorselessly killing anyone who gets in his way or just happens to be nearby. There are some particularly gruesome deaths but the movie takes itself far too seriously for a slasher and is not put together well enough to be anything disturbing, although as this is number six in the series I must admit I was expecting something much more ridiculous. It's not a terrible movie, it's not even a bad movie but it is lacking something to make it a worthy contender to other movies in the slasher flick genre. 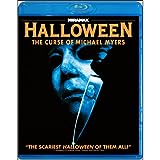