The dream you can't escape ALIVE!
Posted on 07 February 2010 by
Pazuzu Iscariot

Compared to a number of non-shocking movies on the video nasty list Nightmares in a Damaged Brain (also known as just Nightmare and also known as Blood Splash and Schizo) is well deserved of it's designation of nasty. Not only is the movie superbly gory, sleazy and violent it is put together in a way that really messes with the hub of the nervous system making it difficult to determine where the damaged brain is located and whether we are watching a nightmare designed to give the viewer uncontrolled multisensory stimulation in the comfort of their own snoezelen room. The storyline seems fairly straightforward but the occasional wrench is thrown into the gears and pistons of the plot to induce an element of uncertainty and director Romano Scavolini's frequent trippy directorial jaunts over certain nightmarish scenes increase the confusion to the power of bewildered. It is difficult to determine whether the story is a simple, everyday mental-patients-journey-home inspired by The Littlest Hobo or if there is a much deeper and meaningful twist involving secret government research and experiments on children. Inclination slopes towards the former as the conspiracy theory doesn't clearly expose itself and the trippyness can be blamed on the mental delusions and traumas that have damaged the brain in question.

The plot revolves around George Tatum (Baird Stafford) AKA case #5306-8A, a violent schizophrenic who is released from his comfy padded cell a little prematurely and embarks on a journey to reunite himself with his family in Florida after being the first "success" of some new experimental drugs. Traumatized by some childhood event involving some sleazy parent bedroom antics and more blood than Louis Braille accidentally reading a mandoline, George is obviously not ready to re-integrate with the squalid strip-club and hooker filled society outside of the confines of the happy institute where non-consumerist people with opinions are kept alongside murderous serial killers with mommy issues. The flashbacks of George's childhood trauma are revealed in more detail as the story progresses and each little nugget of back-story inspires something nasty to happen to people in the vicinity of his particularly unstable brain.

Meanwhile back in the family home in Florida, George's pre-institution family are having troubling times and are being pestered by nuisance phone-calls plus young C.J. is starting to develop a macabre sense of humour with which he delights his family and the babysitter. Unaware that George is on his way home, the family are befuddled as to who would terrorise them with hang-up phone calls and Susan, the ex-wife of George, is struggling to maintain her relationship with the babysitter and her newfound hippie boyfriend due to her sons bloody pranks as the George chromosome becomes dominant in his phenotype.

As George gets closer to home his visions become more revealing and violent and he combats this with increasingly brutal attacks on the seedy general public and an increased ability to foam at the mouth. When he finally gets home he decides that the best way to reintroduce himself back into the family unit is by wearing a scary mask and carrying an ice pick, a notion that can be easily misunderstood and end up in a bloody bloodbath.

Nightmares in a Damaged Brain makes good use of the nightmares in George Tatum's brain and the resulting actions of these brain spasms to fill the screen with a tumultuous amount of gore and successfully merges fantastical gore, such as occularly animated gore piles, with some nastily brutal and sordid schlock. The movie is a barrage of violence immersed among the story of a family with a troublesome child who seems to have not fallen far from the Tatum tree. The moral of the story seems to be that scientists place too much faith in Hylomene and TL-54 and that the world is a sordid place that inspires brutal killers. Gore and naked strippers aside, the movie is well shot, effectively soundtracked and has some rather nice special effects which only enhances the bloody carnage and boobies that make up a defining Video Nasty. The ending becomes almost slashery and the "smile at the camera" finale triggers memories of traditional slashers of the era. Nightmares in a Damaged Brain is definitely one of the finer moments of the Nasty list hailing from the US and the structure of the tale definitely inspires an unsettled dreamscape for those who view it whether those dreams be of axe murderousness or bad eighties hair-cuts, fashion and music.
This review was posted on 07 February 2010 by
Pazuzu Iscariot
Categories: Video Nasties, Slasher Movies
Tags: 1980s, 1981, Extreme, Psychopaths & Serial Killers, The Golden Age 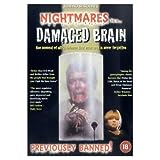